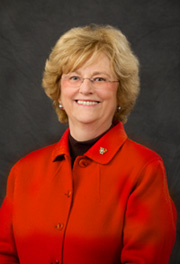 After a national search, Dr. Mary Ellen Mazey was appointed President of Bowling Green State University on March 22, 2011. Dr. Mazey’s extensive experience in Ohio public universities and with implementing strategic plans, coupled with her understanding of the role higher education has to play in the state’s well-being, led the BGSU trustees to select her as the next president of the University.

Before becoming president of BGSU, she served from 2009-2011 as Provost and Vice President for Academic Affairs at Auburn University. In that capacity, she oversaw the academic programming for twelve colleges and was responsible for fostering the advancement of the university’s strategic plan. While at Auburn, Dr. Mazey was chair of the Enrollment Management Council, the University Campaign Feasibility Task Force, and the Efficiency Task Force. In addition, she served on the Association of Public and Land-grant Universities’ Council on Academic Affairs Executive Committee.

From 2005-2009, she was Dean of the Eberly College of Arts and Sciences at West Virginia University (WVU), where she led a college-wide implementation of the WVU 2010 Strategic Plan and served on the Council to Implement the University’s Strategic Plan. In addition, she served on the Presidential Search Committee, the Enrollment Management Council, and the WVU Research Corporation. She also played a leadership role in the university’s Advanced Energy Initiative and nanotechnology research effort. She was a board member of the West Virginia Humanities Council, the Monongalia/Preston County United Way and the West Virginia NASA Space Grant Consortium.

Prior to being appointed Dean at WVA, Dr. Mazey served for seven years as Dean of the College of Liberal Arts at Wright State University. She was founding director of the Center for Urban and Public Affairs at Wright State and served in that capacity for eleven years, from 1983-1994. During that time, she was the university’s representative to the Ohio Board of Regents’ Urban University Advisory Committee. In addition, she served as chair of the Department of Urban Affairs and Geography and led the creation of a Master of Public Administration Program. From 1993-1996, Dr. Mazey held the title of Distinguished Professor of Professional Service at WSU.

Dr. Mazey received her Ph.D. from the University of Cincinnati in urban geography in 1977 and taught at that institution for two years before joining the faculty of Wright State University in 1979.

In 1996-1997, Dr. Mazey was the appointed Director of the Office of University Partnerships for the U.S. Department of Housing and Urban Development (HUD). In that capacity, she had oversight of HUD’s $25 million in grant programs to colleges and universities across the country. In addition, she served as HUD’s liaison to higher educational associations, other federal agencies, and colleges and universities. Dr. Mazey has served as a grants reviewer and consultant to HUD and the U.S. Department of Education in addition to being a consultant to the Appalachian Regional Commission and numerous local governments, colleges and universities.

She and her late husband of 40 years, Bruce, had two sons, Bryan and Zackary. The older, Bryan, has a Bachelor of Science degree in electrical engineering from Wright State University and a master’s in engineering management from the University of Dayton. He works for GE Aviation in the aerospace industry. He and his wife, Michele, have two young children and live near Cincinnati. The younger son, Zackary, earned a Bachelor of Science degree from Miami University in accountancy and finance and received a Juris Doctorate from the University of Dayton School of Law. He practices law in Charleston, W.Va.