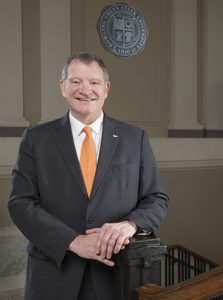 Rodney K. Rogers, Ph.D. '81, assumed the role as the 12th president of Bowling Green State University on February 23, 2018, after serving in the interim post since January 1, 2018. Prior to being named president, Rogers had served as provost and senior vice president since 2012 and, before that, dean of the BGSU College of Business since 2006.

Experienced in both academia and business, Rogers has a Ph.D. from Case Western Reserve University, an MBA from BGSU and a B.A. in music from Ohio Northern University. Before completing his doctorate at Case, he practiced as a CPA for 10 years.

As BGSU’s chief academic officer, Rogers was a key architect of efforts and initiatives that have contributed to BGSU seeing significant increases in student success including its best four-year graduation rate as well as the highest freshmen academic profile in the University’s history.

He has overseen the addition of academic programs aimed at meeting today’s workforce needs; increased opportunities for education abroad, co-ops and internships that prepare students for employment; the alignment of the University’s academic budget with its strategic plan; been engaged in philanthropic activities that resulted in major gifts to support student scholarships, professorships and facility naming.

Before joining BGSU, Rogers served as associate dean and director of academic programs within the School of Business at Portland State University, in Oregon. He has taught financial reporting, performance measurement and international financial reporting at various universities including Portland State, Case Western Reserve, Thunderbird: The American Graduate School of Management, and the École de Management at EuroMed-Marseille, in France.

As a faculty member, his research focused on the ways in which financial analysts use information, strategies firms employ to disclose information to the marketplace, and the institutional role of the accounting profession within the capital markets. He has published or presented over 30 papers in a variety of academic journals and conferences, including Accounting, Organizations and Society, Journal of Business Ethics, and Journal of Financial Statement Analysis. He was a visiting research fellow at the Cranfield School of Management in the United Kingdom from 2001-04.

In addition to his academic work, Rogers has consulted with a variety of businesses and organizations including Nike, Inc., Wendy’s International, Starwood Resorts, The Standard, Vestas-America, Schnitzer Steel, Waggner-Edstrom, and Veterans Affairs Medical Centers. Additionally, he designed and delivered over 150 executive education programs integrating the development of financial acumen with leadership competencies which have been delivered in the United States, The Netherlands, China, Thailand and Canada.

Dr. Rogers is committed to continuing BGSU’s upward trajectory as the campus continually evolves to meet students’ needs and embrace the most current best practices in higher education. It is the University’s mission to nurture intellectual and personal growth, creativity and the pursuit of excellence in a collaborative, mutually respectful environment.